The Trench, set 24hrs before the Battle of the Somme, takes us through the soldiers’ emotional experience in the confines of the trenches; from boredom to fear, panic to restlessness. Billy MacFarlane, 17, and his older brother, Eddie, have volunteered for service and their squad depend on the war-hardened Sergeant Winter and the scholarly Lieutenant Hart for their survival. Then word comes they’re to be in the first wave of attacks…

‘… the wonderful Daniel Craig [is] grittily believable as the hardened sergeant, the only one with any idea of what’s really going on.’    Total Film

‘… impressive and affecting.’    Time Out

William Boyd on The Trench

This is a low budget World War I film set during the 48 hours before the Battle of the Somme in 1916. I also directed it. I was left with a totally free hand and so the film turned out exactly as I expected: it can sit on the shelf alongside my novels. As time goes by its then cast of unknown actors grows ever more celebrated: Daniel Craig, Cillian Murphy, Danny Dyer, Julian Rhind Tutt, Ben Whishaw, James D’Arcy, Paul Nicholls. 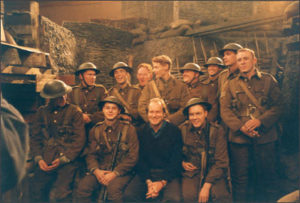