Morgan Leafy is a British diplomat who, for the past three years, has been assigned to the British High Commission of Ninjana, an African nation slowly divesting itself of colonial rule. Leafy is an arrogant and frequently confused alcoholic romantically involved with an African woman named Hazel. Arthur Fanshawe, a new High Commission appointee who wants nothing more than to be moved out of Africa, brings some interesting news to Leafy: massive reserves of oil have been discovered in Ninjana, and so the British will want to stay on the good side of Sam Adekunle, the next president of Ninjana.

However, something of a diplomatic crisis has come up; a native woman was struck by lightning in the courtyard of the High Commission’s compound, and the locals insist that she cannot be moved until certain time-honored rituals have been performed. At a loss for advice, Leafy turns to Dr. Alex Murray, a Scottish doctor and one of the few people equally at ease with both the British colonials and the natives. But Leafy’s romantic problems are about to get even more complicated…

Politics are already strained between English imperialists and the West African government of Kinjanja, when womanizing British diplomat Morgan Leafy (Colin Friels) is caught in bed with Celia (Joanne Whalley-Kilmer), wife of corrupt Kinjanjan Presidential candidate Sam Adekunle (Louis Gossett, Jr.). As punishment, Leafy is forced into bribing an official who has voted down a project that stands to make Adekunle very rich. Leafy thinks he’s gotten off easy until he learns the lone holdout is none other than Kinjanja’s own brick wall of integrity, Dr. Alex Murray (Sir Sean Connery). Meanwhile, Leafy must also contend with his absurdly stuffy boss Fanshawe (John Lithgow), Fanshawe’s lusty wife (Dame Diana Rigg), and their luscious, too friendly daughter.

William Boyd on A Good Man in Africa

The second film to be based on one of my novels, and the second collaboration with Bruce Beresford as director and Mark Tarlov as producer (he also produced “Aunt Julia”). It tells the story of a hapless junior diplomat caught up in a corruption scandal in a fictitious African state. Great cast: Sean Connery, Diana Rigg, Lou Gosset jr., John Lithgow. 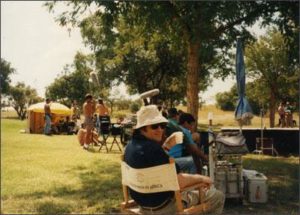 William Boyd on the set of A Good Man in Africa 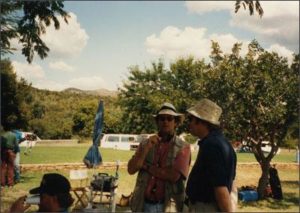 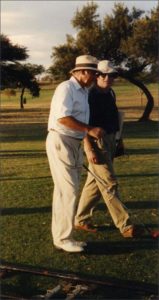